radius financial group, inc. is a New England-based, full-service mortgage bank. Founded in 1999, radius has grown into one of the areas premier residential lending groups. 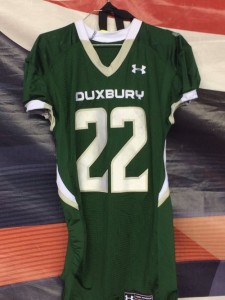 Boston, MA, December 5, 2016 (Newswire.com) - The New England Patriots Hall of Fame is an exciting, innovative and interactive modern museum experience for all ages. It honors the greatest Patriots of all time while simultaneously preserving their history.

The Kraft family together with the MIAA also recognizes the best-of-the-best High School football players by selecting one jersey from the winning Super Bowl teams and displaying it for fans of all ages to see.

I love the kid and cannot think of a more deserving honor to cap off his HS career. Well deserved!

In an interview with the Boston Herald on being named “All Scholastic - Player of the Year”, the unassuming DeMeritt refused to take any credit for his success, something his teammates predicted would happen earlier this season.

“I just wanted to win and contribute in anyway I could,” DeMeritt said. “Football is the ultimate team sport and I'm lucky to have the best teammates in all of New England.”

“I love the kid and cannot think of a more deserving honor to cap off his HS career. Well deserved!” head coach Dave Maimaron said.

Get notified about new releases.

Sign up for email updates from radius financial group inc..